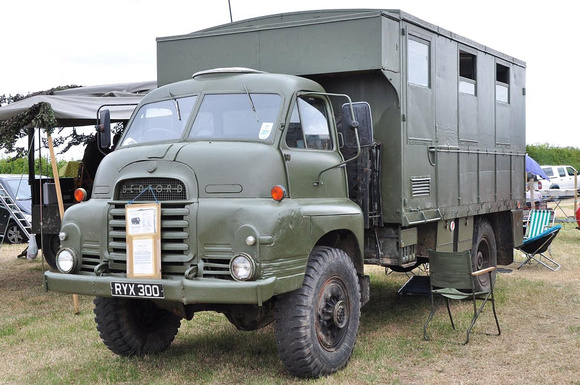 [Ian Moore] This is presumably now carring the body from another vehicle, as since it was originally issued to Hampshire as a Bridging Parts Carrier it would most probably have a GPL type of body with a tilt.

[Mike Przyrembel] Or has the reg been transferred, it has an army cab?

[Ken Reid] That number appears to have been transferred from an ex Auxilary Fire Service Bedford RL used as a Bridging Parts Carrier with Hampshire FB.

[Ian Moore] Could well be an Army cab, since there is no sign of the twin amber lights on the front of the roof, but the body looks as though it might just have come - repeat, might - from a Civil Defence Fordson. We could be looking at a distinct hybrid.

[Gordon McLaughlin] The body is definitely military. With variations in detail and with different interior fittings, it was used for several roles, mostly workshops. There would be a body plate somewhere just below the louvres on the side which would identify it exactly. Apart from the registration number, this could be simply an ex-Army vehicle.
© CCMV George Ward
Powered by ZENFOLIO User Agreement
Cancel
Continue