The first run was held in 2007 to link in with the opening of the new building at the Bill Richardson Truck Museum in Invercargill with a memorable run and parade for Bill in Invercargill. The 2012 tour began in Picton on Monday 17/9/12 and after travelling down through the Buller Gorge to Greymouth on the West Coast for the night, the tour on 19/9/12 involved coming over Arthur's Pass at 920 metres which is one of the few passes through our Main Divide - a mountain range that separates the wetter West Coast of the South Island from the larger flatter and dryer East Coast.

After stopping at the Alpine village of Arthur's Pass they then had to climb Porter's Pass, much less of a climb, before descending down to the Canterbury Plains and stopping at Sheffield Domain for afternoon tea. The trucks then went on through the Rakaia Gorge, where some of the Lord of the Rings was shot, before stopping at Methven for the night, a popular ski resort.

Over the next few days they continued down south stopping at Wanaka, Invercargill and many other stops before heading back north up the east coast. Trucks coming from the North Island will have covered around 4000 - 5000kms before they get home. There are lots of stops along the way to check out truck collections, machinery operators or interesting truck operations. Roughly ten days of travelling right around the South Island. While there were 125 trucks registered, 90 actually made the line up and are in the tour. I hope to share all 90 with you in different settings and apologies in advance for any double ups. Hopefully it will give you a good feel for the diversity of classic trucks we have in New Zealand.

Two videos of the trucks climbing up out of the Waimak Gorge - the sounds of the different motors was amazing with all the climbing they were doing. Had to leave it to do its own thing while I took photos. I raced ahead of the trucks from the Sheffield Domain stop to have plenty of time to get set up but hardly got out of the car before the first one was climbing up the hill. Left the car unlocked with the keys in it, 200 metres away my camera pack with lens and a poured but undrunk cup of tea and stuff strewn all down the hill for 500 metres as I rushed to get the perfect spot. Just as well most of NZ is fairly honest! HOWARD PETTIGREW 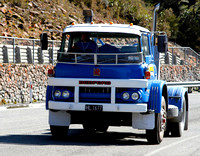