Visitors 2817
159 photos
In 1980 I joined a company called Lep Transport Ltd., one of the largest freight forwarding and associated trade companies in the world with some 50 offices in the UK and a long list of subsidiaries globally.

I departed in 1993 but retain some old friends who were there long before me and continue there today after several re-branding exercises and takeovers. They are now known as Agility Logistics (where do they get these names from?). Lep emerged in the early 20th century and as an example freighted the return of Bleriot's aircraft to France after his epic flight to England. They also pioneered continental railfreight transport and later Continental trailer services. They had numerous subsidiaries including airfreight, bloodstock, machinery installation, factory removal, fairs & exhibitions, projects and export packing. That was when everything was packed in heavy wooden cases before container and ro-ro developments.

Two of my former colleagues were given a pallet of publicity material and old photographs which was about to be ditched, and from this my good friend Mr Dick Nash has scanned more than 130 images of Lep history and transport related photographs. These have been passed on to me to share with CCMV.

I hope you will find them interesting albeit without dates or too many details. Thought provoking if not the cause of some head scratching. 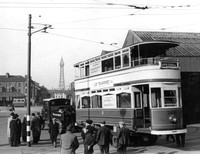 ab This would be a difficult load today - then 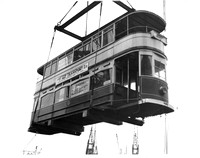 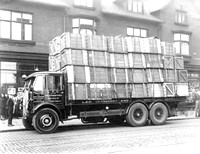 An old van of EGE

b 1954 wooden container for Pakistan 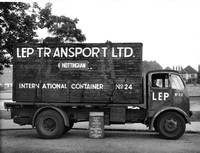 Bedford on the case 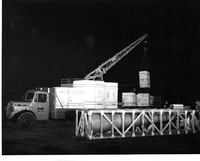 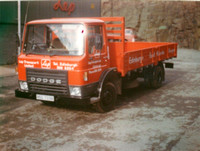 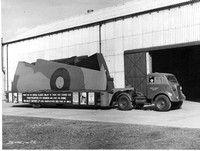