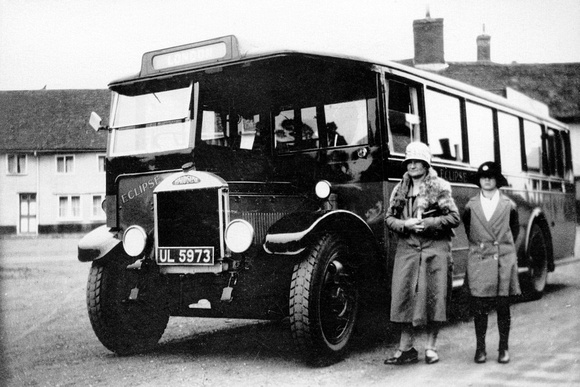 Ray Wood writes ... My grandfather Jack Taylor took the photograph of this coach operating under the fleetname of 'Eclipse' owned by Robert Neal. The photograph was taken in the '30s and includes my grandmother Aggie and mother Ivy Taylor (became Wood) standing beside it.

Maurice Bateman writes ... Eclipse was owned by Robert Neal who commenced operating as one of the London independent bus operators under the name Eclipse Omnibus Company in May 1923. He sold this operation to Public in 1927 but commenced operating coaches in 1929, buying two Maudslay ML3s and three Maudslay ML3Bs of which UL5973 was one, and continued to do so until 1948. Eclipse started an Ealing to Yarmouth service in 1929 which lasted until sold to Grey Green in 1936. Their Ealing to Clacton service continued on until the end when that licence was sold to Valliant Direct Coaches in 1948.

John Bennett writes ... Eclipse ran an express service to Great Yarmouth which was sold. They also ran excursions etc but the coach, which looks new in the picture, has London on the blind. The buildings with their very steep rooves are typical of Essex and Suffolk, might be a clue as to location?
© CCMV Ray Wood
Powered by ZENFOLIO User Agreement
Cancel
Continue