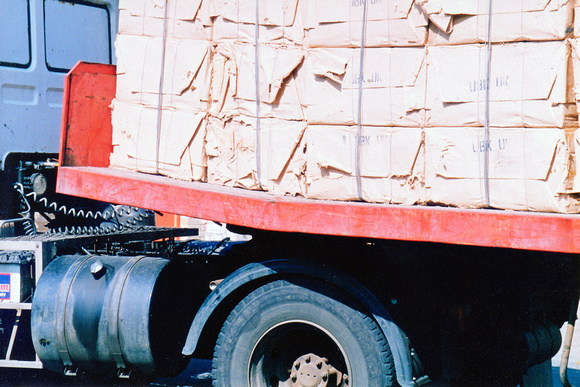 John Turnbull writes ... Looks like it has been going for quite a while, that corrosion is well established.

Martin Speechley writes ... What was scary was I had delivered a load in Kent, then into the docks at Strood to pick up the pulp, most of it was side loaded until the last bale which was placed on the back and the whole load shunted tight by the loader. Then I came around the southern part of the M25 (by Leatherhead) to have a blow out on one of the super single n/s leading tyres on the trailer, you can see in one of the photos the new tyre and two of the mud flaps missing, at that point I was not aware of any issues. I came off the M4 at Langley to come through Iver village into the factory which involved several 90 degree turns, there was a few large bangs and sharp jolts, which was a worry, I was glad to turn into the factory and wanted to get the load off but again I had some tight turns, made the first two but not the third, and the result was the old York trailer gave in. It was scrapped once unloaded and parked up. Lucky it was in the yard and not going around a roundabout or on the motorway!
© CCMV Martin Speechley
Powered by ZENFOLIO User Agreement
Cancel
Continue