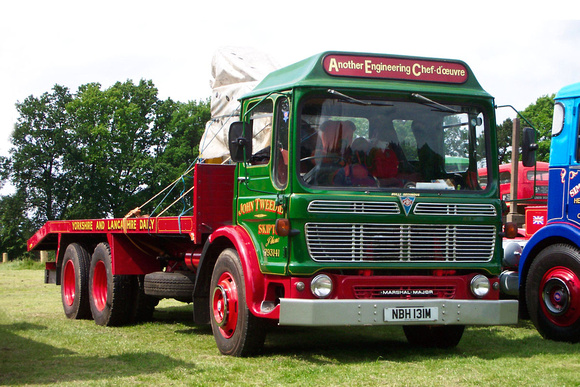 John Tweedie brought this interesting AEC to the AEC rally at Wollaton Park in Nottingham on June 4th/5th 2005. The lorry was in a bad way when John acquired it from Steve Taylor on November 2004, but he worked his usual magic and restored it to a high standard.

With a lengthened chassis and flat platform body it is unrecognisable to how it was originally (see previous photo) so it has been transformed.

Badged as a Marshal Major, this Mammoth Major chassis no 2TG6RT26322 retains its AV760 engine while the double drive rear bogie was replaced with single drive and a trailing axle by the previous owner/operator. The load is an AEC AVT1100 engine in full working order.
© CCMV Classic Commercial Motor Vehicles
Powered by ZENFOLIO User Agreement
Cancel
Continue