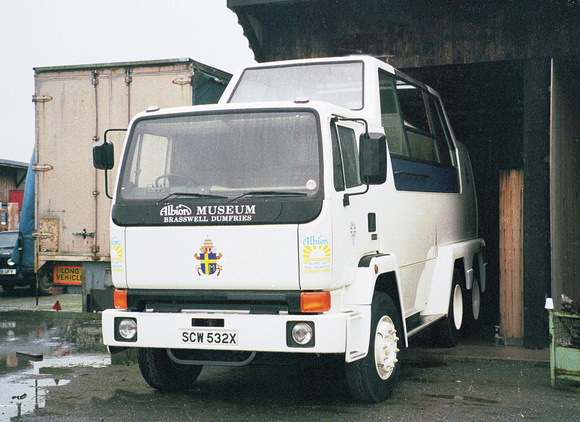 One of the Popemobiles awaiting sale by auction in 2006, in less than ecclesiastical surroundings. (Bill Reid)

Chris Story, New & Star 5/9/06 ... An armour-plated popemobile used by Pope John Paul II has been sold for £37,000 at an auction in Dumfries. The 24-ton converted British Leyland truck, which is bulletproof and bombproof, was used by the late pontiff when he toured Scotland in the summer of 1982. He travelled in the vehicle to Bellahouston Park in Glasgow and Murrayfield in Edinburgh, where he conducted Mass for more than 300,000 people. The six-wheeled truck, which has just 11,000 miles on the clock and is said to be in excellent condition, is one of two built by the former UK motor giant for the visit. It was bought in 1998 by transport enthusiast Mick Hayton for his Albion Museum in Dumfries. [Mick Hayton passed away in 2006]. Auctioneers Thomson Roddick Scottish Auctions, based in Dumfries, had valued the vehicle at between £15,000 and £20,000.
© CCMV Bill Reid
Powered by ZENFOLIO User Agreement
Cancel
Continue