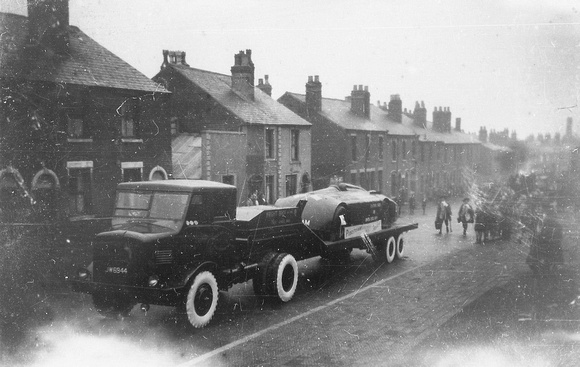 Smart ex-US Army prime mover of Wright Bros with a new coach-built cab to replace the original open design, and a cherished number plate, parading through Wolverhampton in 1949 at the Calvacade of Transport with 1926 Sunbeam 1,000hp Land Speed Record breaking car on the low loader. The car was driven by Henry Segrave to a new record speed of 203.79mph at Daytona Beach, Florida USA on March 29th 1927, only to be beaten the following year by Malcolm Campbell in Bluebird. By the mid/late 1930s the record had been broken another seven times, with Campbell and Bluebird attaining over 300mph for the first time. (Mike Paine via Bill Armstrong)

With thanks to George Ward for confirming the date and location, Trevor Pitman for notes about the land speed record car, and Jonathan Pye for identifying the tractor. According to John Harrington, Wright's was nationalised in 1950 and was involved in a long battle for compensation for a yard full of ex military equipment. Most was of US origin. The only artics recorded are four Macks of unknown type.
© CCMV Mike Paine
Powered by ZENFOLIO User Agreement
Cancel
Continue