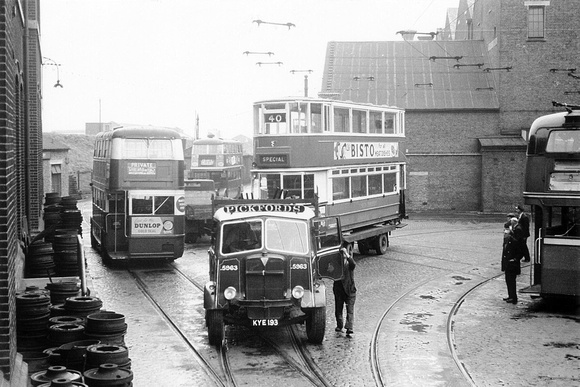 The scene is the Central Car Repair Depot at Charlton, which was a mile or so down the road from Penhall Road scrapyard towards Greenwich. The body of E/1 car No 1025 is being taken to Reigate Garage for temporary storage. The tram's bogies will be on the platform of the Pickfords lorry. With the help of the vehicle records at LTM, the official date for tram 1025 moving is 21 April 1952. The STL with its back to the camera is STL2675, the staff bus to Catford, which has no rear reg number but a trade plate fitted above the platform. The STL facing the camera is STL2668, staff bus to Clapham. The PSVC records STL2668 as being a staff bus from 4/51 to 7/54, and STL2675 similarly from 9/51 to 10/53. Both vehicles were from the wartime batch STL2648-2681 which were Country Area buses, so presumably they were still green.

There is a stub of a road that led into the depot still in existance known as Felltram Way, SE7. The embankment to one side at the rear is the Angerstein branch railway which is still there and sees occasional use. Felltram Way was named after Aubrey Llewellyn Coventry Fell who was Chief Officer of the LCC Tramways from 1903 to 1924. Sidings off the Angerstein Wharf branch went into the Depot and were connected to the tram tracks. Approximately just beyond where the lorry is parked in the photo was a wagon turntable.

Brian Watkinson ... This is not Penhall Road, its actually Charlton Works, Penhall Road scrap yard was nearby.

My guess is that this is the preserved E1 tram 1025 on its way to Reigate to be stored as part of the LT heritage fleet later to be displayed at Syon Park and Clapham. 1025 was done up in the works prior to being sent to Reigate. The trolleybus has been overhauled; they didn't just repaint trolleybuses. The delicensed STs or STLs, D, or Gs are in use as "works transport", possibly moving trams or trucks around at Penhall Road. Note the bumper bar at the rear of the bus.

Anyone any other ideas?

Michael Wadman ... Central Car Repair Depot at Charlton, which was a mile or so down the road from Penhall Road scrapyard towards Greenwich. The body of E/1 car No 1025 is being taken to Reigate Garage for temporary storage.

John King ... There is a stub of a road that led into the depot still in existance known as Feltram Way, SE7. That embankment to one side at the rear is the Angerstein branch railway which is still there and sees occasional use.

Michael Wadman ... There were actually sidings off the Angerstein Wharf branch which went into the Depot and were connected to the tram tracks. There's a marvellous photo in the LTHG's book "London Transport Tramways 1933-1952" taken a little further down, showing trams, including a Feltham, two railway goods trucks, and the Fordson tractor 351X (nowadays kept at Acton) which replaced the Andrew Barclay 0-4-0ST as the works shunter, plus a goods train on the
embankment. Approximately just beyond where the lorry is parked in the photo was a wagon turntable.

BTW I think you'll find that the road leading to the depot was actually "Felltram Way" (ie with two 'l's). I don't know for certain but I would
guess that it was named after Aubrey Llewellyn Coventry Fell who was Chief Officer of the LCC Tramways from 1903 to 1924.

Brian Watkinson ... I don't think both of these are STLs, the one facing is not an STL, more like a G or early D. STLs without roof boxes had three glass front frames IIRC I don't think they are Charlton staff buses either. Staff buses were used at Aldenham and Chiswick to transport staff from closed works like Charlton, Fulwell and Reigate to the new works. Charlton like Chiswick before 1962 had no staff buses I have ever heard of. In addition, staff buses had to be licensed, one bus at least has trade plates which could not be used for passenger carrying duties even staff buses, and normal buses were not equipped with
bumper bars like the one with its back to the camera.

Maurice Bateman ... In the early '50s some of the STL and STD staff buses ran on trade plates and certainly did carry passengers, there is a photo taken in Hayes of STL2679 in LBM144 page 43 doing just that.

Don't forget that in those days there were two types of trade plates, white letters on a red background (general series) and red letters on a white background (limited series) and the trade plate laws were different then to now. These two types remained in use up to 1970. The staff buses had trade plates from the general series. I remember that the limited series, which I suspect was the cheaper option, had a docket book for each TP number which had to be filled in each time the plate was used explaining the journey being undertaken and the reason for it. The driver had to carry the top copy of the docket with him and produce it on demand.

As to the facing bus is definately an STL but I am not sure if it carries one of the war time built STL17/1 bodies which because of supply difficulties never had roof number boxes fitted - all baring one body were allocated to the Country Area. This bus almost looks as if it could be the STL12 body body fitted to Country area STL1023, which also did not have a roof number box, going by the 'frowning' look of the roof dome which the STL17/1 bodies did not have.

The rear bumper bars were commonplace on STLs but the difference here is that it stops short at the number plate thus inferring that it has had a replacement rear corner panel fitted.

Brian Watkinson ... Thanks Maurice, did Charlton Works have its staff buses then? Thanks for the correction on trade plates. A bus operator I know got done by the police for carrying people on trade plates. What was the advantage with them for staff buses considering that the RT2/RTL/RT staff bus fleet kept their registrations? That STL must be a rare one. STLs are not my chosen subject but I checked all the profiles I could see and without a view of the radiator it looked like an early D or G with an RF style destination display. I have just noticed the destination box at the top. Were these buses red or green?

Maurice Bateman ... I don't really know if there were staff bus runs to Charlton Works or not, or why some staff buses operated on the general trade plates, but this latter practice ceased around 1954/55. Maybe there was a change in Trade Plate regulations governing their use. Certainly it was illegal to carry passengers on the Limited Use trade plates except in certain circumstances such as a second driver or prospective buyers on a short demonstration run, and these people I think had to be logged on the TP docket. There is a photo in Ken Blacker's STL book of seven staff bus STLs lined up at Aldenham and all but one are on trade plates.

I don't have STL1023 listed as a staff bus nor do I know if that odd STL12 body without the roof number box was moved subsequently to another chassis but the body was on STL1023 in 1948.

All except one of the 14 STL17/1 bodies were painted green for the Country Area, the odd one being body 454 which was placed on newly overhauled chassis STL932. First allocated to Enfield it finished its days as a trainer at Putney Bridge. Again there are photos of it in the STL book.

Brian Watkinson ... Thanks Maurice. I just wondered if those buses were there to move trucks around, or bearing in mind a lot of the buses at that time (which was presumably 1952 or early 1953) were scrapped at Penhall Road maybe they had just been delivered for scrapping.

As for trade plates and passengers, what I do know about the staff bus STLs and STDs used at Aldenham for a while (from anecdotal evidence from staff there when I started) was that some were not fit for service and they could only travel on the lower deck due to the condition of the upper deck, maybe running them on trade plates got round any CoF issues! In addition, those who used the staff buses were not covered by any LT accident insurance or when travelling to and from work on staff passes. We signed a waiver to that effect when accepting a staff pass and applying for a staff bus pass. I believe the same applied to BR staff and until this changed in the late 60s, we bought a travel to work insurance through REPTA which also gave discounts at shops all over the country.